How to update from an Apollo to the Apollo 400+?

If you are a current Apollo 400, 500 or 600 user, you may be wondering how do I get access to the benefits of the new Apollo+ recently released by Seaward.

The answer is simple; all of the new Apollo+ features are available to current Apollo Series users, so there’s no need for you to miss out on all the latest improvements in PAT testing technology.

- Only one hardware change was made, this change allows the Apollo’s battery to be externally charged for the first time.

- By adding a short wiring harness and new battery connector it is now possible for users to buy additional batteries that can extend the working time of the Apollo.

- Any current Apollo users wishing to update to the new battery configuration can return their Apollo to any Seaward approved service centre to have the chargeable update carried out. (Update service kits are available)

- Additional batteries and a mains charger are available to buy as accessory products.

- The key strength of the Apollo platform is its ability to allow the user to perform firmware upgrades. This future proofs the Apollo and means that all the benefits of the new Apollo+ firmware are just a quick download away.

- Updating your firmware to the latest Apollo+ version will give you access to a host of user interface improvements, including better record search functionality, additional user permissions, a new socket outlet test and many more useful features.

- See the full guide on how to update your firmware at the back of this document.

The Apollo+ has some new accessories too. These are available for you to buy from any approved Seaward distributor.

- Additional batteries and mains charger (for upgraded Apollos only)

How to update your Firmware

To check / download the latest version of firmware visit the following:  www.seaward.com/ApolloSeries

Make sure the Apollo+ Series is switched off.  Press and hold the function key 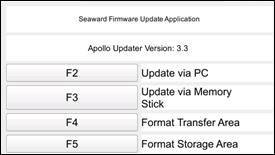 Download as PDF
Don't know what you're looking for?
The Seaward PAT tester selector will guide you to your ideal tester, based on some simple questions.
Find the right PAT tester
Do you still need help?
Download our free guide to PAT Testing.
Download guide