How to update the firmware on the Apollo 600+?

To check / download the latest version of firmware (4.1.7) visit the following: www.seaward.com/apollo-600-plus-firmware

Make sure the Apollo+ Series is switched off. Press and hold the function key 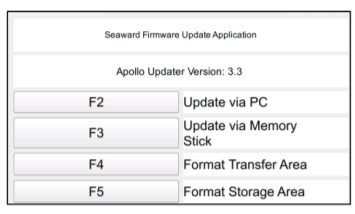