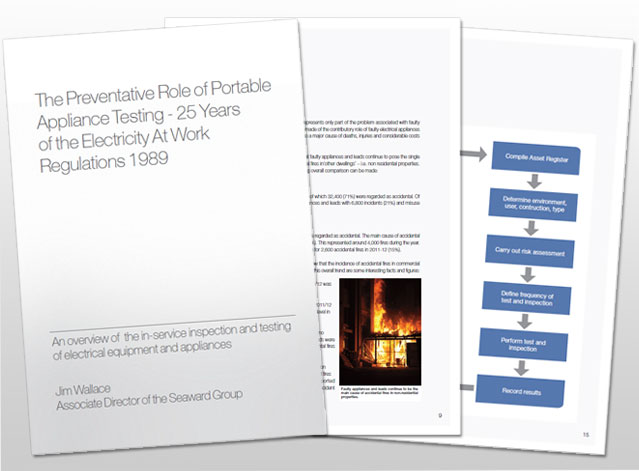 Download your copy of our PAT Testing white paper today.

The EAWR 1989 set out to raise the standards of electrical safety within industry and commerce. In doing so it has become firmly acknowledged as the starting point for what is now known as portable appliance testing.

This white paper looks at how the PAT testing industry has developed over this 25 year period, how the regulations have helped to improve safety in the workplace - and also on the associated impact on some other electrical equipment issues that could not have been anticipated back in 1989.

This section covers a history of guidance notes which have become available over the years including the HSE guide on maintaining portable electrical equipment.

Mainly focusing on the 4th edition of the IET Code of Practice, this section also outlines the main considerations which should enable an informed decision to be made on inspection and test intervals.

Looking at the types of workers and companies who may carry out PAT Testing and statistics based on the split between in-house and contractor testing.

PAT testing failure rates in different working environments and how the HSE and IET have converted this into guidance.

The nature of electrical faults

What causes electrical faults and how they can be detected. It also looks at the range of tests and inspections recommended by the IET Code of Practice.

The consequences of electrical faults

Within this section you will find a table of interesting statistics based on injuries from contact with electricity or electrical discharge over the years.

Potential electrocution and electric shock represent only part of the problem with faulty electrical items. This section focuses on accidental fires and statistics from 1989 through to 2011/12, with a comparison of the causes of fires in non-domestic buildings since 2000.

PAT Testing has played a big part in the detection of dangerous counterfeit electrical equipment. This section looks at statistics around the goods and what measures are being taken to minimise their existence in the UK.

It's not only counterfeit products which can be unsafe, products from legitimate sources can sometimes be unsafe too. This section looks at product recalls and the importance of professional PAT Testing and having a preventative maintenance regime in place.

A common sense approach to compliance

This section looks at taking a common sense and risk-based approach to electrical testing within the workplace.

The appliance of testing science

Looking back over the past 25 years, this section talks about the evolution of PAT instrumentation published.