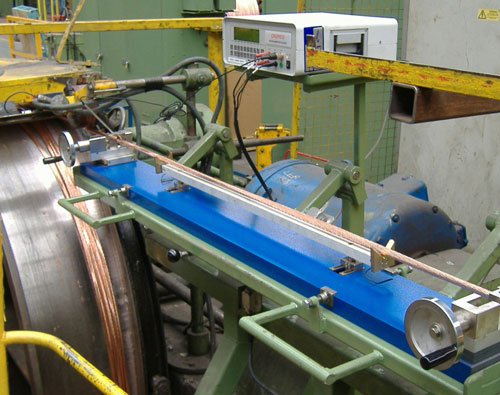 Wires and cables: the measurement of success

It is necessary to measure the resistance of all wires and cables that are used to distribute power including the cable used to wire domestic property says Nathan Barwell business development engineer, Seaward Group.

The resistance property of cable needs to be low enough to ensure that it will not heat up too much when the maximum rated current is passed through it. The higher the resistance, the hotter the cable will become with a set current flowing through it. Therefore, the manufacturer must ensure that the resistance per metre of the cable produced complies with the published specification and any international standards that may apply.

It is however important that the maximum permitted resistance per metre is achieved. From the cable manufacturer&rsquo;s point of view, the lower the resistance value per metre the larger the diameter of the cable and so the greater amount of copper that&rsquo;s used. Copper is expensive and is the main contributor to the cable costs - the lower the amount of copper used the greater the manufacturing cost and raw material savings.

The accurate and reliable measurement of resistance is therefore important to enable the cable manufacturer to achieve the minimum cable diameter while remaining within the declared specification. This is a very powerful argument for good resistance measurements in the cable industry and the accepted method of measuring metre lengths is to use a one metre cable clamp.

To ensure meaningful measurement it is necessary to define the conditions: the length of cable to be measured, the temperature at which the cable is to be measured and the current used to measure the resistance are all factors that can influence testing and results &ndash; so these need to be clearly defined.

When it comes to cable length, it is normal practice to measure a metre length of cable and special cable clamps are available for holding the wire. The clamp should include connections for the current and connections for the potential points. The use of a current clamp eliminates inconsistent readings due to small changes in the length of cable measured. Care should be taken not to stretch the wire when placing it into the clamp, as this will increase its resistance.

The clamp should also have provision for shielding the wire against draughts, which can cause temperature variations. An additional desirable feature of the clamp is the provision for mounting a temperature sensor adjacent to the cable to be measured. The diagram below shows the connections to the wire being measured, note that the current connections are placed outside the potential and the exact one metre length is measured between the potential connections.

Four terminal measurements: most modern digital microhmmeters like those available from Cropico (part of the Seaward Group) all use the four terminal principle of measurement, sometimes referred to as the 'Kelvin' or 'Thompson' principle. It is recommended to employ this measurement technique for determining values below 100 ohms as lead resistance is eliminated from the measurement.

Compensating for the heating effects caused by the measuring current is not quite so easy. The temperature compensation method used for ambient temperature changes can be used but to be effective the cable should be submerged in a tank of liquid (water is normally used) and the temperature sensor used to monitor the liquid.

It is also important to note the possible causes of measurement errors. Inconsistent measurement conditions, incorrect cable clamp, positioning of potential measurement connections vary, ambient temperature variations not compensated for measurement varying due changes in temperature, draughts blowing across cable sample causing small changes in cable temperature, cable being heating by measuring current causing a continual drift in measurement and poorly made connections an oxides or dirt on cable producing high resistance at connection points can all play a part in skewing measurement the accuracy of results and must be taken into account when considering an effective so measurement solution for wire and cable applications.

Using a microhmmeter such as the DO5000 combined with a cable clamps can help to improve measurement accuracy and consistency. In a typical cable manufacturing environments, it is linked to a specialist clamp which holds a standard one metre length of cable or wire in place as the copper strands passes along the bobbin extruder. The clamp incorporates separate current and potential measurement connections, which are attached to the cable for resistance measurements to be made.

There are three cable models in the Cropico range and these offer the ability to accurately clamp and measure cable up to 1000mm2. There is also a model that has an integrated water bath which will automatically bring the cable under test to a specific temperature. Programmable current levels and the selection of different test speed settings give the Cropico tester the flexibility to accurately measure the resistance values of different cable products. These include single end and plain soft wires through to bunched, stranded and large diameter rope type conductors.

Accurate and reliable in-line cable resistance measurements taken in this way enable cable manufacturers to maintain optimum operating efficiencies in terms of copper raw material use. The versatile Cropico D05000 has programmable current settings in 100 steps from 10&micro;A to 10A and measures from 3m&Omega; to 30k&Omega; with a resolution of 0.1&micro;&Omega; and &plusmn;0.03% accuracy.

Variable measurement speed settings of 50, 25 or 2.5 per second allows the selection of high speed testing for production line applications, a medium mode where the device under test needs more time to settle or a slow speed for manual operation where display clarity is a priority.

True four-wire resistance measurement eliminates lead resistance errors, while auto averaging and automatic temperature compensation with 20&deg;C referencing or other user-defined settings increases true measurement accuracy. All these options are included in the basic D05000 unit as well as a data logging function which stores up to 4000 readings with date and time stamp. Statistical analysis of these values allows the display of max/min/average values as well as peak to peak and standard deviation.

Interfaces can be added for remote control and integration into automated test systems. For applications where portability is required the Cropico 5001 model can be powered from either a mains supply or by rechargeable batteries. The charger is also incorporated into the unit and the full 10 Amps pulsed measuring current is available when used in battery mode.

The D05000 series forms part of a range of microhmmeters and precision measurement instrumentation from the Seaward Group of companies.