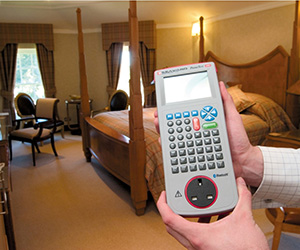 A leading international hotel group has adopted formal electrical appliance testing protocols in one of Dubai’s foremost hotels to ensure the provision of a safe environment for both staff and the public.

As part of the utilisation of the new testers‚ the Dubai-based Aragon Instruments LLC has liaised with the hotel’s engineering personnel to set up formal portable electrical appliance inspection and testing as part of an ongoing preventative maintenance programme.

Aragon has supplied specialist handheld Seaward PAT testers and accessories and also provided training to engineering staff to enable them to carry out periodic tests of all electrical appliances used at the hotel and on the airport site. By regularly testing the appliances the intention is to identify any electrical faults that could pose a safety hazard to users.

At the Sheraton Jumeirah‚ part of the Starwood Hotels Group‚ in-house maintenance personnel are using Seaward PrimeTest 300 instrumentation to verify the safety of all electrical items used in the hotel’s 256 guest rooms‚ suites‚ bars‚ restaurants and public areas. Among the appliances tested are all hotel cleaning equipment‚ kitchen appliances and other electrical tools and equipment.

The PrimeTest 300 tester is lightweight and battery powered for maximum portability and speed of testing. It is equipped with all the standard electrical safety tests required by Class I and Class II electrical equipment.

In addition‚ special bluetooth technology provides wireless connection with safety label printers and makes the downloading of test data to PC records fast and simple. In the Dubai applications test results saved in the tester as work is carried out are downloaded into special PATGuard Pro 2 software to enable formal test records to be maintained. The software also enables test certificates and safety management reports to be printed direct from the results database.

The process of electrical inspection and appliance testing is now common practice in many countries around the world. As well as personal injuries, fires started by poor electrical installations and faulty electrical appliances are also a major cause of additional deaths, injuries and often result in considerable damage to businesses and properties.

To prevent such problems‚ planned and proactive electrical safety programmes such as those now introduced at the Sheraton Jumeirah are designed to detect potential problems with electrical appliances before they occur.

A spokesperson for Aragon Instruments said: “Ensuring that faulty electrical appliances do not pose a danger to users is a fundamental part of maintaining health and safety in the workplace.

“With such a vast range of electrical equipment in use and with many items being moved between different parts of a building or site‚ it is important that formal portable appliance testing procedures are put in place and managed properly.

“This is where the reliability, versatility and all-purpose test capabilities of the Seaward testers enable large organisations to combine fast and effective testing with a full record keeping system.

“We are delighted to have helped the engineering departments at the Sheraton Jumeirah set up effective portable appliance testing programmes and to maintain the highest electrical safety standards.”